What Is Persistent Memory?

The term persistent memory describes technologies which allow programs to access data as memory, directly byte-addressable, while the contents are non-volatile, preserved across power cycles. It has aspects that are like memory, and aspects that are like storage, but it doesn’t typically replace either memory or storage. Instead, persistent memory is a third tier, used in conjunction with memory and storage.

How Persistent Memory Will Change Computing

Over the last few decades, computer systems have implemented the memory-storage hierarchy shown in Figure 1. The memory-storage hierarchy utilizes the principle of locality which keeps frequently accessed data closest to the CPU. Successive generations of technologies have iterated on the number, size, and speed of caches to ensure the CPUs have access to the most frequently used data. CPU speeds have continued to get faster, adding more cores and threads with each new CPU generations as they try to maintain Moore's Law. The capacity, price, and speed of volatile DRAM and non-volatile storage such as NAND SSDs or Hard Disk Drives have not kept pace and quickly become a bottleneck for system and application performance. 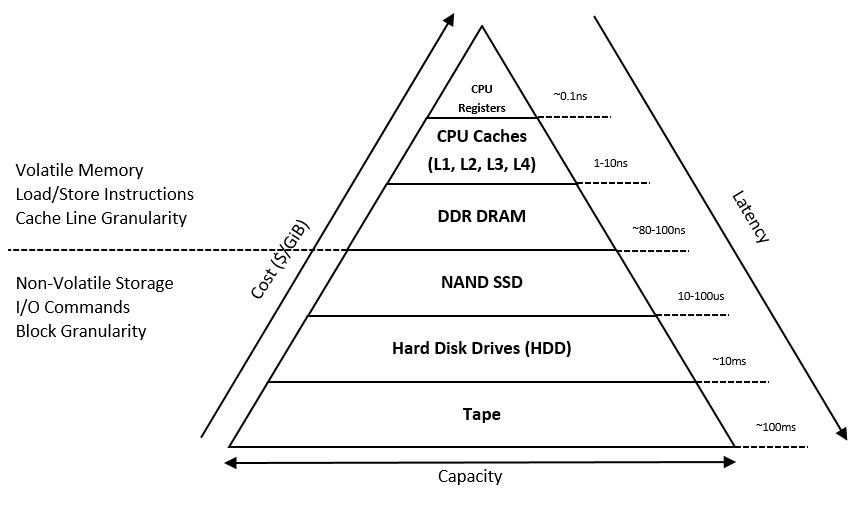 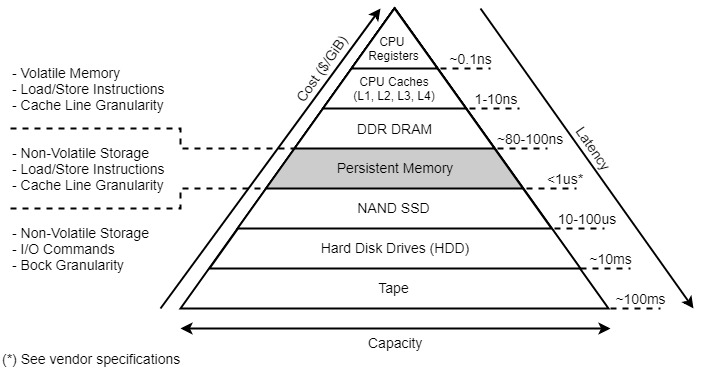 Persistent memory is bit addressable, which means you can perform I/O to it as if it were memory. In terms of capacity, persistent memory will be roughly an order magnitude larger than DRAM.

Using persistent memory for storage is basically the same idea as using a RAM disk, with one very important difference: When the power is turned off, the data is not lost. To the operating system, the persistent memory looks like conventional block storage, and a filesystem can be built using that block storage.

The performance of persistent memory is always under discussion, particularly in the case of 3D XPoint, because it is so close to release. In this case, performance has always been discussed in general terms: